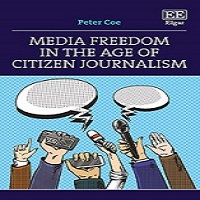 ​Journalism has changed. The internet and social media have permanently altered the media ecology and have shifted the media paradigm beyond recognition by enabling new actors to enter the media marketplace, and by changing the way that news is generated, published, and consumed.

Central to this communication revolution are citizen journalists, who's newsgathering and publication activities have made them crucial to public discourse. This book interrogates how the internet and social media have enabled citizen journalism to flourish, and what this means for the traditional institutional press, the public sphere, media freedom, and press regulation. It argues that the law's treatment of media freedom as a concept needs to be modernised, as citizen journalists are operating as media, but are not recognised as such.

To facilitate this modernisation, it advances a new functional definition of the media that distinguishes media from non-media actors, and which provides a conceptual framework that recognises twenty-first century methods of newsgathering and publication. In doing so, it deals with some of the legal challenges this creates, including those arising from anonymous and pseudonymous speech, contempt of court, defamation, and how voluntary self-regulatory press regulation might be ‘reimagined’ to attract this new breed of journalist.

This event will have significant appeal beyond academia. I envisage academics, practioners and policy makers engaged in media law (broadly defined), human rights, journalism, media studies, and communication policy to be interested in this event. It will also have national and international appeal because of the panellists and their respective jurisdictions.

This event is a book launch. My intention is to run the event as a panel session. As the author, I will explain my motivations for writing the book, and why it makes an important contribution to the scholarship on free speech, media freedom and regulation. The panellists, who are drawn from academia and practice will discuss their thoughts on the book, and how they believe it contributes to the debates surrounding how we define journalists and regulate them in the current media environment. The audience will be given the opportunity to ask the panel questions at the end of the session.

The book is published by Edward Elgar. My editor has confirmed that, to support the event,  a discount code will be set up on the Edward Elgar website to allow those attending to receive 35% off the price of the book.

Media Freedom in the Age of Citizen Journalism (e-elgar.com)

As the author of the book Dr Peter Coe will lead the panel, which will include:

Professor David Rolph (University of Sydney)
David Rolph is a Professor at the University of Sydney Law School, specialising in media law. He is the author of two books, as well as many book chapters and journal articles, on all aspects of media law. From 2007 to 2013, Professor Rolph was the editor of the Sydney Law Review, one of Australia’s leading law journals. He currently serves on the editorial boards of the Media and Arts Law Review, the Communications Law Bulletin, Communications Law and the International Journal of the Semiotics of Law. He is the Editor of Hart Publishing’s Landmark Cases on Defamation Law.

Professor Paul Wragg (University of Leeds)
Paul Wragg is Professor of Media Law at the School of Law, University of Leeds. Paul has a number of research interests that coalesce around his primary interest in free speech theory, including privacy and press regulation. Paul is a member of the Code Committee of IMPRESS, one of the independent press regulators which has arisen as a result of the Leveson Inquiry into the culture, practices and ethics of the British press. His work has been published in leading journals in the UK and abroad, such as the Cambridge Law Journal, Public Law, Sydney Law Review, Industrial Law Journal, the Journal of Media Law, and Northern Ireland Legal Quarterly.  It has been referred to by, amongst others, a House of Lords select committee on press freedom, the Australian Law Reform Commission, and mentioned in the Supreme Court. Paul’s monograph A Free and Regulated Press: Defending Coercive Independent Regulation was published by Hart Publishing in 2020.

Rebecca Moosavian (University of Leeds)
Rebecca Moosavian is an Associate Professor in Law at the School of Law, University of Leeds. Rebecca’s research concerns Article 8 ECHR and its conflict with free expression in misuse of private information law. She has also published on the constitutional issues raised by the Iraq War, particularly prerogative power and judicial review. Rebecca’s work has been published in journals such as Public Law, Northern Ireland Legal Quarterly, the Journal of Media Law and the International Journal of Human Rights.

Lexie Kirkconnell-Kawana (Head of Regulation at IMPRESS)
Lexie Kirkconnell-Kawana is Head of Regulation at IMPRESS (the Press Recognition Panel’s approved press regulator). Lexie is a New Zealand qualified barrister and solicitor who has worked in all forms of media regulation. She has previously worked at the Advertising Standards Authority in the investigations team and at the New Zealand Office of Film and Literature Classification, an independent state media regulator, in a research and semi-judicial capacity. Lexie also has an avid interest in London’s arts and culinary scene.

Professor András Koltay (President, Hungarian Communication and Media Authority)
Professor András Koltay is the President of the Hungarian Communication and Media Authority. His principal research has been concerned with freedom of speech, personality rights and media regulation. He is the author of more than 350 publications, and numerous monographs on freedom of speech; in English: Freedom of Speech – the Unreachable Mirage (Wolters Kluwer 2013), The Troubled Relationship between Religions and the State. Freedom of Expression and Freedom of Religion (Whitelocke 2017) and New Media and Freedom of Expression (Hart 2019). He was a speaker in more than 125 conferences in several countries. He co-edited a volume published by Cambridge University Press on blasphemy regulation (Blasphemy and Freedom of Expression, 2017).

Dr Peter Coe (University of Reading and IALS/ILPC)
Dr Peter Coe is a Lecturer in Law at the University of Reading and an Associate Research Fellow at the Institute of Advanced Legal Studies and the Information Law and Policy Centre. His research interests are: (i) citizen journalism's impact on free speech, media freedom and regulation, and the concepts of privacy and reputation; (ii) defamation, including the protection of corporate reputation; (iii) media power and plurality, the role the media plays within society and its impact on democracy. His work in these areas has been published in leading journals such as Legal Studies, the University of Melbourne's Media & Arts Law Review, the Journal of Business Law and Northern Ireland Legal Quarterly, amongst others, and his monograph, Media Freedom in the Age Citizen Journalism, was published by Edward Elgar in 2021. He is also the co-editor, with Professor Paul Wragg, of Landmark Cases in Privacy Law, which will be published by Hart in 2022. During 2021-2022 Peter is acting as the UK’s National Rapporteur on ‘Freedom of Speech and the Regulation of Fake News’ on behalf of the International Academy of Comparative Law and the British Association of Comparative Law. He is the current editor-in-chief of Bloomsbury’s Communications Law.

Please note that registration for this seminar will close 24 hours in advance. Details about how to join the seminar will be circulated via email to registered attendees closer to the event date.